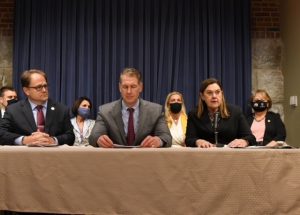 The legislation incorporates all of the reforms included in the Senate Democrat’s ethics legislation (Senate Bill 4), but goes farther in key areas.

“For too many years, the corruption of a few legislators and other elected officials has cast a shadow over the good work being done by so many other lawmakers in our Capitol,” said Sen. Tracy, who serves as the Chair of the Legislative Ethics Committee. “We must restore Illinoisans’ faith in their government, and we do that by shining more sunlight on politicians’ activities and making it easier for prosecutors to go after bad actors.”

Under current Illinois law, prosecutors cannot even obtain judicial approval for a wiretap in corruption cases, because corruption-related offenses are not included in the wiretap statute. Thus, while state and local prosecutors can use wiretaps to aggressively pursue gang, drug, and gun offenses, they are barred from using wiretaps to aggressively pursue corrupt public officials, no matter how serious the alleged offense. This change would bring Illinois in line with other states such as New York, which allow wiretapping for a wider range of criminal activity.

The Senate Republican legislation also provides the Illinois Legislative Inspector General (LIG) greater autonomy to independently investigate allegations of political wrong-doing, by giving the LIG the ability to investigate and issue subpoenas without prior consent of the Legislative Ethics Commission (LEC), a panel comprised of sitting lawmakers. Current law requires the panel made up of legislators to authorize the investigation of their fellow legislators.

Expanded use of statewide grand juries, local prosecutor use of wiretaps, and greater autonomy for the LIG are not included in the Senate Democrats’ ethics reform proposal, SB 4.

Sen. Curran, who worked 19 years as a prosecutor in Cook County prior to his election as a State Senator, said these provisions are a critical element of true ethics reform. “While we appreciate and agree with some of the measures the majority party has brought forward in their Senate Bill 4, they do not go nearly far enough,” said Sen. Curran. “We have to provide those who investigate and prosecute these crimes the tools they need to do their jobs effectively and efficiently. And that means untying their hands, and allowing these professionals to address political corruption allegations without having to rely on the federal government, and without having to gain investigatory approval by the LEC.”

Additionally, Senate Republicans’ SB 1350 would ban legislators from lobbying other branches of state government or units of local government for compensation, by closing loopholes that allow a legislator to leverage their position as an elected official to influence action at another level to their own financial benefit. The bill would also require that legislators wait at least one full year, or until the end of the current General Assembly, between when they leave office and when they become a lobbyist – whichever is longer.

The legislation also places restrictions on the use of campaign funds for legislators who become lobbyists or who are appointed to an office requiring Senate confirmation. The provision would ensure that legislators’ campaign funds cannot be used for personal financial benefit in lobbying or to assist in securing a lucrative appointment.

“We are supposed to hold our legislators to a higher standard because by definition they are elected to represent the people’s interests not their own,” said Sen. McConchie. “This legislation will help us hold them accountable and hopefully, renew some of the trust that has been broken in the process.”