Springfield — Fire officials and legislators banded together at the Capitol today to call for the passage of legislation to help alleviate the critical shortage of volunteer fire and EMS workers in Illinois. 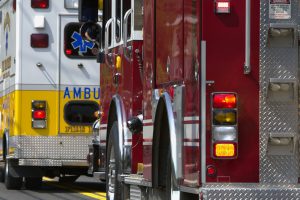 Modeled after legislation passed in New York, Senate Bill 3027 would provide a $500 state income tax credit for volunteer emergency workers, who earn less than $10,000 in stipends for their service to the fire department. The legislation passed the Senate unanimously, but a vote has been put off in the House.

“There is a public safety crisis going on throughout the state, with the number of emergency calls to fire departments tripling (the majority of which are for EMS) and the number of volunteer emergency workers plummeting. This reflects a nationwide shortage of volunteers, contributing factors which include: the aging population of volunteers, increased training requirements, and newer policies, which prohibit full-time firefighters from volunteering in their own communities,” explained Highland Fire Chief Kerry Federer.

“Passage of this legislation to provide some relief for these volunteers is long overdue,” said Chief Senate Sponsor Christopher Belt (D-Swansea). “With 70% of the state covered by volunteer departments, we have to think of the billions they save us our State, which would otherwise have to made up with property taxes.”

“Many fire officials have complained of day shifts with only the chief and no firefighters. Just recently, one of our fire chiefs responded to a 100-unit apartment fire, which under NFPA standards, would require 30 firefighters, yet only five firefighters were available! This ongoing daily crisis not only puts the safety of the public at risk, but our firefighters as well,” explained Margaret Vaughn, Government Affairs Director for the Illinois Firefighters Association.

“Since my first day in office, I have proudly stood with our police, fire, and medic personnel because our first responders put their lives on the line every day for our health and safety,” said State Representative Lance Yednock (D-Ottawa), Chief House sponsor of SB 3027. “This proposed income tax credit is one way we can show our thanks to the thousands of volunteers who step up and leave their jobs and families to fight fires and respond to emergency calls, often when literally no one else is around to do it. I thank them for their service and hope we can move this forward to continue to provide emergency response in our communities.”

“With the critical shortage of volunteers and the amount of taxpayer dollars they save us, we can’t afford NOT to pass this legislation, which will help encourage recruitment and retention who serve our communities selflessly, said Rep. Tom Bennett (R-Gibson City), a longtime advocate of such legislation.

“First responders are always at the forefront of each incident or disaster. The past couple of years have been very challenging for these individuals and it’s my hope that creating a tax credit will show our support to the people who keep our communities safe and incentivize more people to join our departments,” said State Senator Meg Loughran Cappel (D-Shorewood).

“People’s lives have changed, and volunteer department numbers are down,” said State Senator Neil Anderson (R-Rock Island), who serves as a professional firefighter in the Quad Cities. “If we can find a way to attract more volunteer emergency workers with a little incentive, it is something this small that could play a big role in saving someone’s home or their livelihoods. My hope is this bill will help increase and maintain retention rates for volunteer departments who already see greater challenges because of less resources. They deserve this kind of support.”

“Many smaller and more rural communities in west-central Illinois rely on volunteer firefighters, EMS personnel and paramedics,” said State Senator Jil Tracy (R-Quincy). “This legislation offers these volunteer emergency workers a $500 income tax credit as a token of our appreciation. We are inspired and thankful for their courage and selfless dedication to protect their fellow residents.”

“While most people run from fire, these volunteer firefighters run toward danger in their efforts to keep their friends and neighbors safe. Many do this heroic work with little or no compensation,” said State Senator Donald DeWitte (R-St. Charles). “This tax credit is a small yet meaningful way we can show our appreciation while helping to drive new qualified applicants to this important field of work.”

“We have an opportunity to show the volunteer firefighters and EMS personnel, who provide the bulk of our protection in the area how much we appreciate them with this tax credit. Volunteer units are saving our local municipalities millions of dollars a year, while saving and protecting lives, this is the least we can do to recognize the sacrifice they make for us every day,” said State Representative Katie Stuart (D-Edwardsville).

“The message we want to get out today is two-fold: first there is a dire need for this legislation to pass; and secondly, we want to encourage people to consider becoming a volunteer fire or EMS worker and make a major difference in the lives of their community. Not all departments are totally volunteer, and some compensate per call while others provide stipends or reimbursement for expenses,” explained Illinois Firefighters Association Legislative Chair Kevin Schott.

ABOUT the Illinois Firefighters Association (IFA): Founded in 1889, IFA is dedicated to the advancement of the Fire Service by providing leadership through education, training, benefits and information networking at the local, state, and national levels.